Have a look at the best moments of the conference on our YouTube Channel.

It would not have been made possible with the love and support of Najwa Ouguerram, Lily Kather, Sumi Cho and Kimberlé Crenshaw.

Full programme of the conference

It has been a year since the inauguration conference! CIJ has been thriving and growing since then, let’s take a look back at the wonderful start into CIJ’s first year. Read below the conference report.

The Center for Intersectional Justice (CIJ) hosted its inaugural conference on September 16th, 2017 to celebrate its launch, recall the story behind its founding, and foster connections between intersectional justice advocates and activists all across Europe.

CIJ was founded in April 2017 by Dr. Emilia Roig in Berlin. Prof. Kimberlé Crenshaw, who coined the term “intersectionality” in 1989 is President of the Center. After the successful administrative setup of the organisation and the institutionalisation of the network of associated experts, the inauguration conference would consecrate the birth of the Center for Intersectional Justice.

The conference was a tremendous success, with over two hundred people in attendance from all across Europe. It took place in the beautiful venue of ICI Berlin and was made possible through the generous financial support of the Hertie Foundation. CIJ’s Associated Experts, members of several European grassroots organizations, representatives of NGOs, activists, writers, journalists, lawyers came together to illustrate the future of European anti-discrimination advocacy throughout a day of critical and invigorating conversation.

The day consisted of two roundtables with four panelists each, split by a workshop session focusing on four topics related to intersectional justice. The two panels were hosted and moderated by Prof. Sumi Cho, Professor of Law at DePaul University (USA), and the workshop sessions were facilitated by four moderators: Najwa Ouguerram (CIJ intern), Henna Zermund-Butt (Editor-in-Chief of MediaDiversified UK), Akim Giroux (Community Building Officer at Transgender Europe) and Farah Merdabi (member of the French Afro-feminist collective MWASI). Before the first roundtable, Professor Kimberlé Crenshaw, President of CIJ, gave the keynote speech, situating the creation of CIJ in the history of intersectionality theory as well as speaking to its significance: 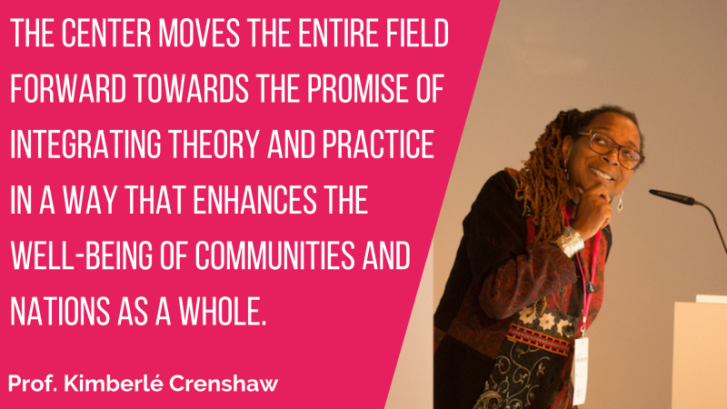 To establish the conference in CIJ’s larger journey, Prof. Sumi Cho determined that the conference was a significant step toward creating a dynamic, responsive, and interactive community of justice, which would be central to CIJ’s success.

Essential questions on the future of intersectional justice in Europe were posed and thoroughly explored. What issues should our advocacy efforts be focused on? How do we overcome the political obstacles to instituting effective anti-discrimination policy? How can we promote coalitions and common goal setting with other organizations active in the field of anti-discrimination? No inquiry yielded a single answer, yet all generated complex and thought-provoking discourse. 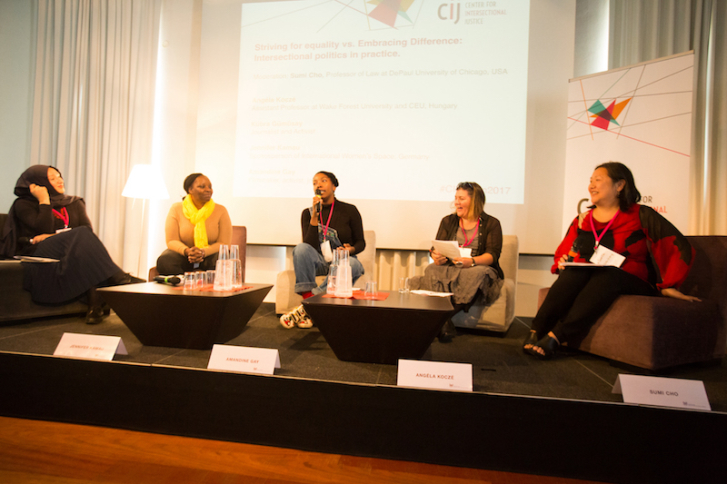 Representation: Documenting Our Own Stories

Panelist Kübra Gümüsay, a public speaker, award-winning activist, and Germany’s first hijabi journalist, shared her struggle navigating professional demands of neutrality and communal desires for solidarity as a Muslim journalist covering immigrant and refugee communities in Germany. Gümüsay’s motivation for her work resonated with the room: “If we don’t speak, we don’t exist; if we don’t speak, we only exist as stereotypes.”

Amandine Gay, Montreal-based Afro-feminist filmmaker, activist, and journalist, found the inspiration for her work along those lines. She spoke on the difficulty of “reclaiming the narrative” as a Black woman in the colorblind French film industry and screened several clips from her feature-length documentary on francophone European Black women, Ouvrir La Voix - Speak Up/Make Your Way. This documentary illustrates the richness and complexity of intersectional identities and social positions.

Jamie Schearer, co-founder of several networks and platforms for Black people emphasized the importance of creating visibility through creating community spaces for Black People.The importance of intersectional representation and recognition was vocalized most powerfully by Clémence Zamora-Cruz, a member of the steering committee of Transgender Europe (TGEU). Without legal recognition as a transgender man or woman, “people can’t show who they are. It is impossible to travel, impossible to vote, impossible to go to the post office to claim a package.” On top of legal difficulties and everyday transphobia, non-white trans* people and trans* immigrants face racism and the challenges of being an immigrant in Europe. For this reason, Zamora-Cruz fights for the legal recognition for trans* people in France and calls for the connection of social movements across “social identity categories”. 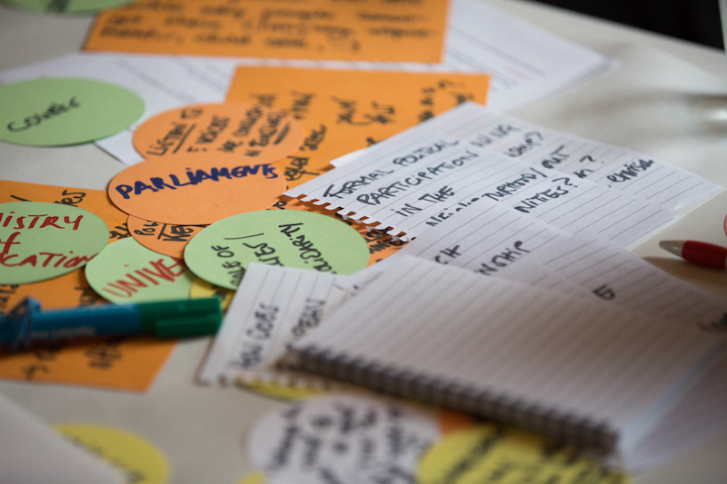 Barriers in Structures and Systems

Though documenting the stories of marginalized people is crucial, institutions through which those stories can be told are often inaccessible. In the Academia and Policy: How to Bridge the Gap workshop, many of the participants voiced how “the [academic] system is closed” to Black scholars and scholars of Color and other marginalised identities such as gender-non-conforming people, leading to the needs of these communities not being voiced - and heard. Telling our own stories and constantly going up against exclusive institutions can also be personally draining, as vocalized by Kübra Gümüsay, who dedicated her talk to the Muslim and hijabi girls looking to become journalists: “I’m doing this job so that no one else should do it.” She underlines the importance of shaping the narrative from the perspective of the people affected by the issues around which public debates revolve.

Sometimes systems are silent. As the group broke out into discussion-based workshops, participants of the Movement Coalitions: Why? How? workshop identified that it is paramount to recognize invisible systems. As one of the main takeaways from the workshop, they identified that there is an “urgency to recognize race as a social construction in Europe,” jumping off of Assistant Professor at Wake Forest University and CEU in Hungary, Angéla Kóczé’s statement that “racism is an invisible structure.”

Racism in Europe is doubly dangerous because the colorblind structures of many European governments mean that the effects of European racism cannot be documented. The negative effects of the French census excluding race and ethnicity were spoken on at length.

Daniel Gyamerah, project manager at „Vielfalt Entscheidet - Diversity in Leadership“, reiterated the issue with colorblind data collection and made the point that data collection can be a powerful tool for intersectional justice movements. His work at Vielfalt Entscheidet includes gathering statistics on the diversity of Berlin’s administration and using them to campaign for more diverse leadership. “Data collection really matters as a tool for intersectional affirmative action,” maintained Gyamerah. 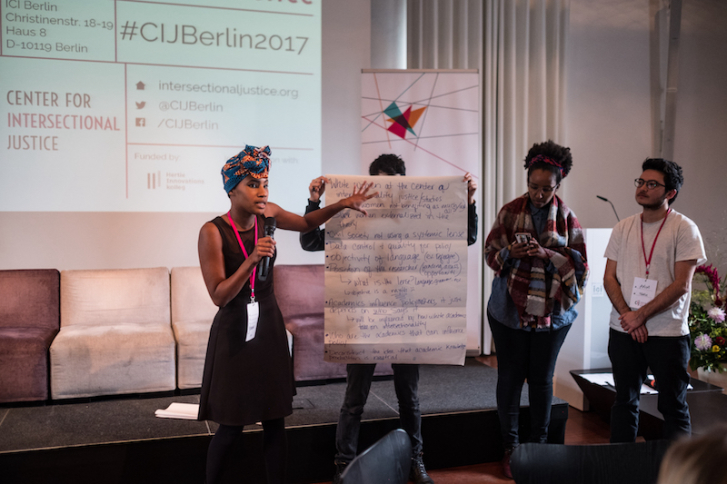 So where does this leave us? How can the conversations we had translate into future action?

All workshops’ participants came up with a list of demands or suggestions based on the topic of their workshop.

The Legal and Policy Frameworks: What needs to change? workshop discussed Europe’s legal and political systems as well as the access to legal knowledge and support. It concluded with four demands for the judicial system: 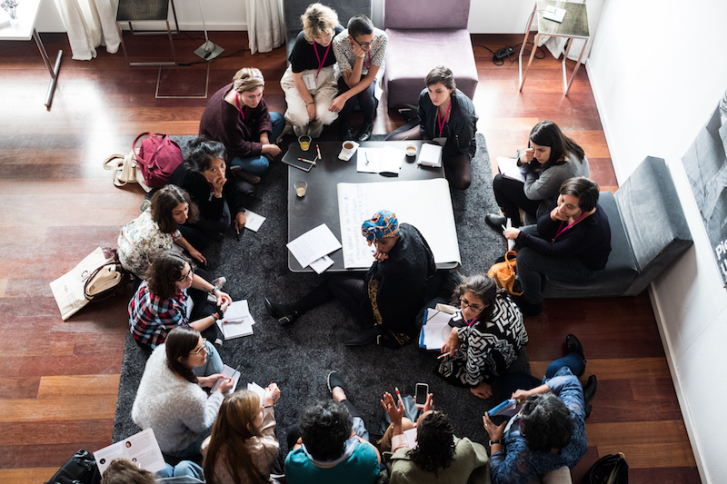 The Movement Coalitions: Why? How? workshop brainstormed how to build a movement of people affected by structural inequalities across Europe, including LGBTQI* communities, Black and of Color communities, disability rights activists, and climate justice activists, especially considering the lack of a common language. The discussion also focused on how to build effective support networks within these communities. Participants made three main suggestions for these movement organizers to form effective communities and coalitions:

The Academia and Policy: How to bridge the gap? workshop explored power distribution and knowledge production in academia. They came to a few different conclusions: